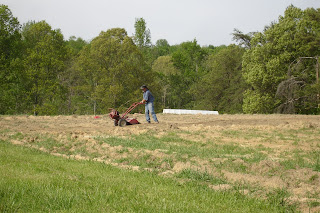 Tina and the kids came up to be with us the last week of April for Planting the Garden. This is the week we are planning on getting most of the Veggie 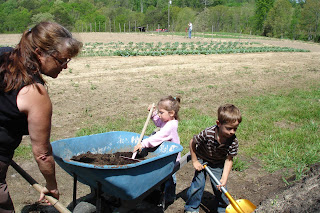 s in the Ground. And did we work hard! We also had a friend come up because she wanted to learn, to plant her own garden.
While Tina and I were putting stakes in the ground Part way through Gary Rototinng, we heard this awful noise that made me think OH NO! and then Gary tried to start it again. It wouldn't start. He thinks it threw a Rod. So off to Northern Tool to get a new engine. We planted, Yellow Squash, Clemsen Spineless Okra, Kolbs Gem Watermelon, Blue Lake Bush Beans, Patty Pan Squash, October Beans, Cucumbers, Lima Beans. 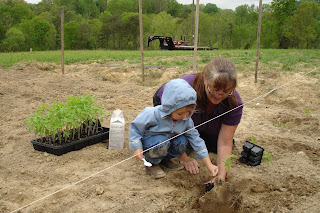 The next day we planted 2 different Varieties of Heirloom Tomatoes, Corn, and Zuccino. When we plant Tomatoes there is several steps we do. First we take the first two sets of leaves of the plant and dig the whole as deep as the height of the plant. We put in a teaspoon of Epson salt and mix it with dirt in the bottom of the hole, this keeps the tomatoes from getting blossom end rot. Then we put in the compost and throw a little dirt in and mix it in the whole. Then we put the tomato in the ground and just leave the top two sets of leaves out of the ground. The tomato plant will grow roots all along the stem that is in the ground and make it a much sturdier Plant. Gary had Rototilled one pass on a plot above the cabbage so Tina & I set up the stakes and Strings before we went to fix Supper. 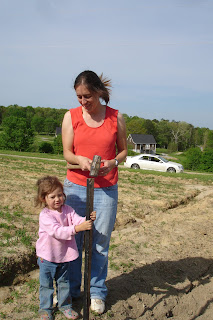 Wednesday Morning the storm was coming.... could we get anything in the Ground before the Rain? We grabbed a Banana for breakfast Gary started rototilling the second pass above the Cabbage patch. Tina Spread Compost & I started planting. We got in one row of Chambers Renegade Watermelon & 3.5 rows of Pink-eye purple hull peas in the ground as it was raining on us. That was it for the day. As the day continued the first storm was so bad we went to the basement for fear of a Tornado. The winds were so strong that is threw our Swing across a log and moved the Greenhouse 1 ft off the foundation. That evening we got another storm that rolled through and finally did a job on the Greenhouse. We will have to rebuild it. But I have to be thankful for only that damage. In the valley less than 1 mile from us in Trenton there was a large Tornado that passed through and destroyed some homes and there were some folks that did not make it. My heart goes out to their family's. Although I am so proud of my home town. Everybody pulled together helping each other. Even some of the business gave out water, instead of gouging people.
Posted by Debi at 5:35 AM No comments: